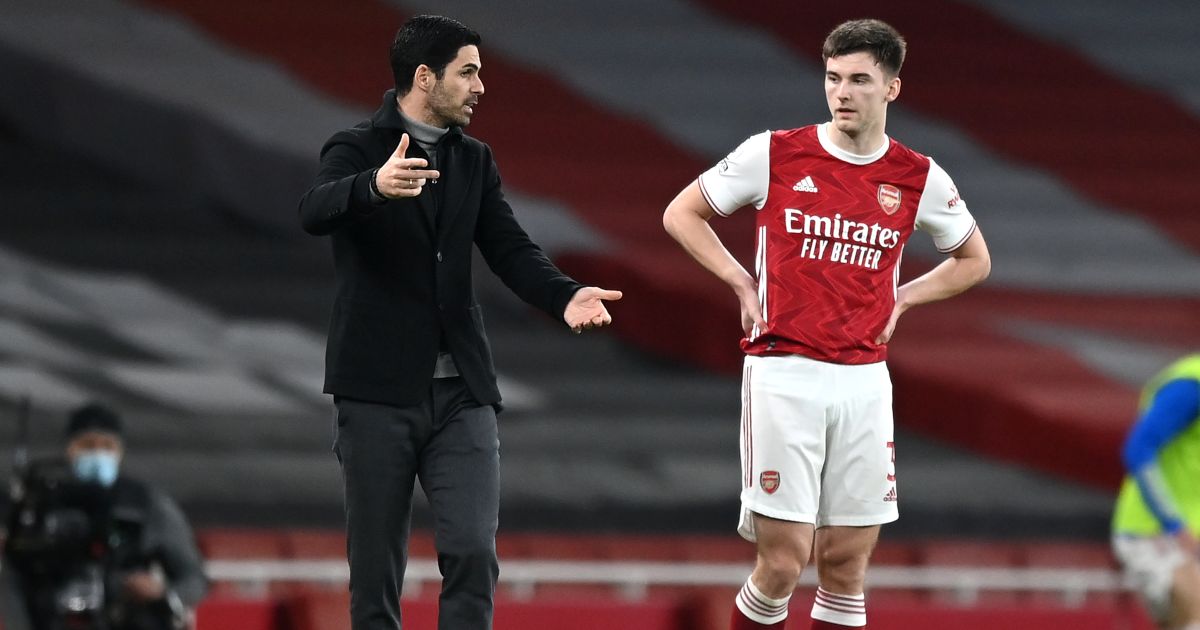 Mikel Arteta is unable to assure Arsenal supporters that Kieran Tierney will play for the club again this season.

The full-back was forced off in the first half of Saturday’s 3-0 home Premier League defeat by Liverpool.

Arsenal confirmed on Wednesday that Tierney suffered knee ligament damage during the game and could be sidelined for the next six weeks.

If that is the case, Tierney could return for the final league game of the season at home to Brighton on May 23 – with the Europa League final taking place three days later.

But, speaking ahead of their Europa League quarter-final first-leg clash with Slavia Prague, Arteta was keen not to make promises about when Tierney could come back into the fold.

“We have to first make sure that he doesn’t need any surgery, which it doesn’t look like,” he said.

“If that’s the case, the time frame will be around that (six weeks). It could have been worse because the action looks quite scary but he’s feeling better and the damage is not that bad.

“At the end of the day, it’s not the bad news that maybe we were expecting after the game.”

Asked if Tierney will play again this season, Arsenal boss Arteta replied: “I don’t know, we’re going to have to go day by day to see how Kieran is feeling, how he is reacting.

“When we get close to playing time and training with the team, depending where we are and how he’s feeling, we’ll make a decision.”

Arteta also stopped short of confirming whether he felt Tierney would be fit for Scotland’s Euro 2020 campaign, adding: “Again, it will depend on how things evolve in the next few weeks.

“He’s so keen to play for us before the end of the season and he’s extremely keen to represent his country in the Euros.”

Tierney has been a pivotal part of Arteta’s side and his absence is likely to be missed, with the Gunners boss conceding he may have to change the approach of his team to counteract the absence of the 23-year-old.

“We’re going to have to make some adjustments because his qualities are unique and we don’t have anybody with his qualities within the squad unless we start to move a lot of pieces,” he said.

“Without any time to train, it is a little bit dangerous to do. But we’re going to have to find different ways to fulfil that gap and use other things that can be as effective as well.”