Mason Greenwood continued his electric start to the season as his late strike snatched Manchester United a 1-0 victory at Wolves.

Greenwood’s third goal in three games made the hosts pay for a string of missed chances and also saw United set a new all-time English football record by extending their unbeaten away record to 28 matches.

But United needed David De Gea’s sensational second-half stop from Romain Saiss to give them the platform for victory.

It capped a dramatic week at Old Trafford after United agreed a deal with Juventus to bring Cristiano Ronaldo back to the club, 12 years after he left for Real Madrid.

They rode their luck at Molineux as Wolves – who have now had 57 shots in the Premier League without scoring this season – suffered Groundhog Day.

Bruno Lage’s side lost their opening two games 1-0 to Leicester and Tottenham and were left empty handed again.

But United carved out victory against the run of play as they prepare to mark Ronaldo’s return.

Wolves’ rapid start began when Adama Traore burst forward after intercepting Fred’s loose pass and found Jimenez, only for De Gea to save with his legs.

Fred’s nightmare start continued when he failed to cut out Ruben Neves’ pass on the break and then could not stop Trincao muscling past him into the area.

Wolves’ rapid start – inspired by Traore – was only aided by United’s mistakes and Jadon Sancho’s miscued header presented Joao Moutinho with a chance which he volleyed over.

The hosts had failed to score in their opening two games, despite having 42 shots, and their profligacy underlined why they had moved for striker Hee Chan Hwang.

The South Korea international watched from the stands after joining on loan, with a £13million option to buy, from RB Leipzig.

Debutant Raphael Varane endured a busy introduction to the Premier League but stood firm against the ferocity of Wolves’ tempo, underlining why United shelled out £34million for the former Real Madrid man.

At the front United lacked ingenuity and ideas and, while Bruno Fernandes smashed past Jose Sa six minutes before the break, he was comfortably offside. 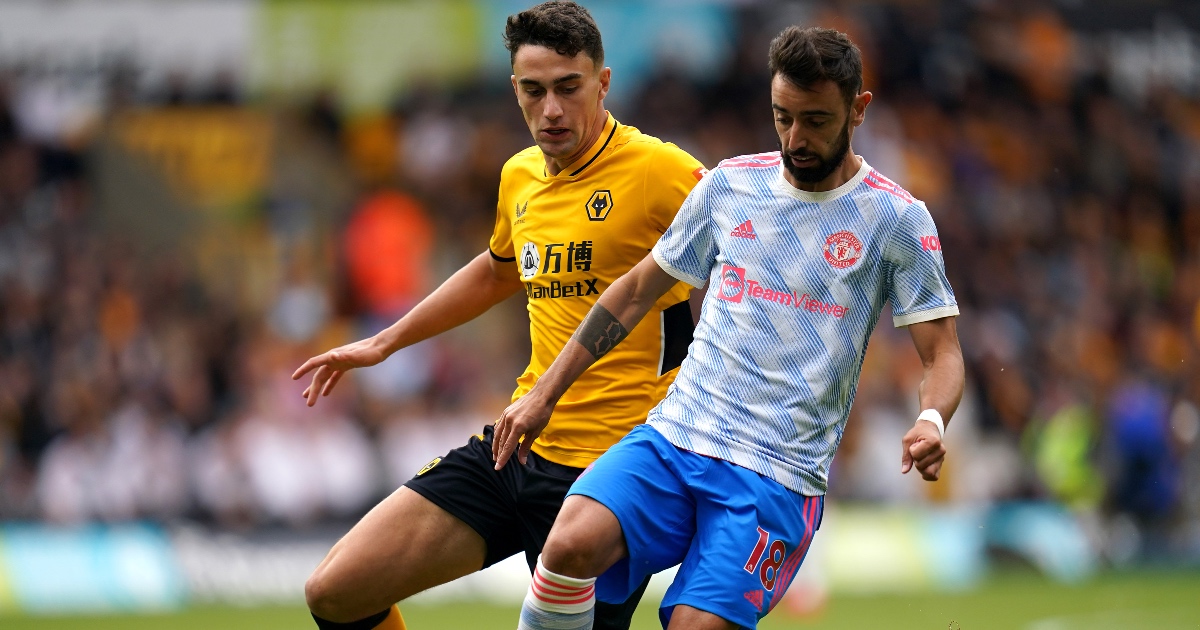 It was a rare moment of respite for the visitors but Greenwood still drilled wide to warn Wolves, despite their dominance, United were ready to punish them.

Another blank would have been a worry for Lage at the break and United underlined their own attacking riches by bringing on Edinson Cavani for Daniel James early in the second half.

Solskjaer’s side stabilised and Fred fired at Sa but Wolves missed another guilt-edged chance after 63 minutes.

Traore was found by Jimenez and he teed up Trincao, only for the forward – unmarked 15 yards out – to miscue his effort and it trickled wide.

Wolves appeared to be edging closer and it took a wonder-save from De Gea to stop them from opening the scoring with 21 minutes left.

Saiss rose to meet Moutinho’s corner and De Gea parried his header but the defender looked certain to score the follow up, only for the goalkeeper to brilliantly parry his shot from point blank range.

Pogba and Neves went in for a 50-50 tackle with the ball running to Varane and he found Greenwood who cut inside on the right and beat Sa from the angle.

Wolves’ protests that Pogba fouled Neves were rejected by Mike Dean as they slipped to another defeat.