Manchester United beat Wolves 1-0 in their first game since announcing they had reached an agreement to re-sign Cristiano Ronaldo.

Arsenal’s poor start continued with a 5-0 defeat at Manchester City, while Liverpool and Chelsea drew 1-1 at Anfield.

Everton made it seven points out of nine with a 2-0 win at Brighton and Leicester also secured their second win of the season – 2-1 at Norwich.

Brentford’s encouraging start to life in the top flight continued with a 1-1 draw at Aston Villa, while Newcastle drew 2-2 at home to Southampton, and Crystal Palace twice fighting back to secure a similar result at West Ham.

Check out my team of the week and then make your own selections towards the bottom of the article. 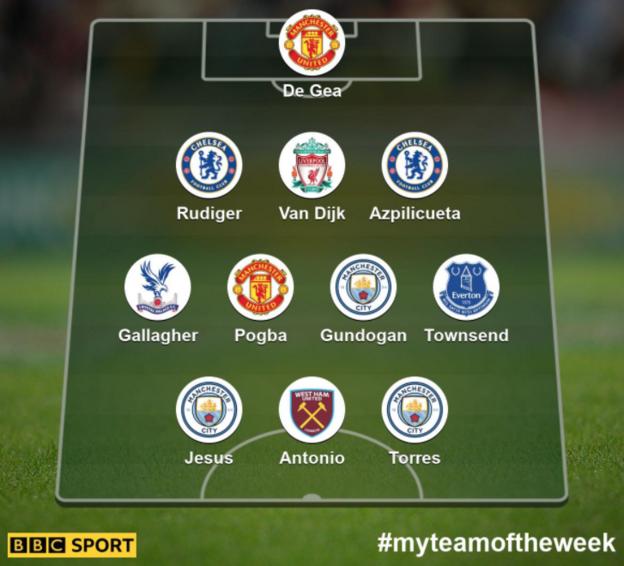 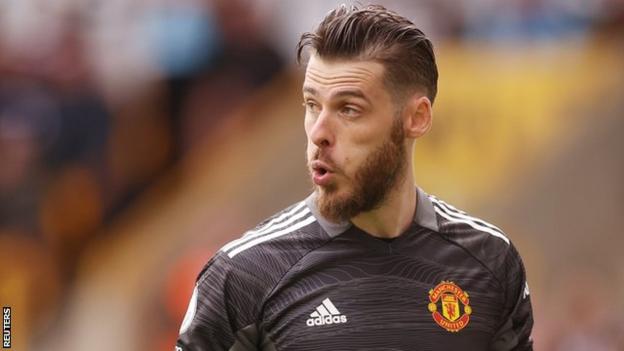 David de Gea: With 12 minutes to go in the game between Wolves and Manchester United, Chelsea’s Edouard Mendy was pencilled in after his performance against Liverpool.

The Senegalese goalkeeper held his nerve in a hostile atmosphere and was in sparkling form. He had to be. Chelsea battled brilliantly in order to secure a well-earned point with 10 men against a Liverpool side who looked in the mood – and an Anfield crowd baying for blood.

But that was before United’s De Gea made the most extraordinary point-blank double save from Wolves defender Romain Saiss. I haven’t seen a performance like this from De Gea for at least two years.

Did you know? De Gea made five saves against Wolves to help his side to a 1-0 win. It was his 123rd Premier League clean sheet, 11 more than any other Manchester United goalkeeper. 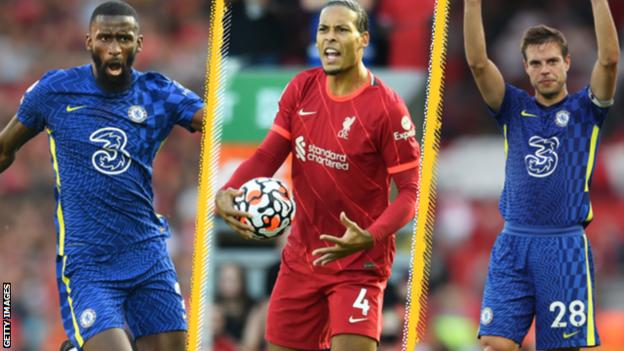 Antonio Rudiger: The red card given to Chelsea’s Reece James against Liverpool should have been a turning point, but it wasn’t. Blues manager Thomas Tuchel summed it up when he said his team showed great resilience and spirit – no-one more so than Rudiger.

I have been saying for some time now this player is Chelsea’s greatest defensive asset.

When he was booked in the first half I thought he was odds on to receive a second yellow, but Rudiger proved to be far too smart for that. Under Tuchel, the German centre-back has got better.

Did you know? Rudiger made three tackles, three clearances and won possession six times against Liverpool.

Virgil van Dijk: If the shot that had Mendy frantically scrambling across his goal-line was anything to go by, then it looks like Van Dijk’s right knee has fully recovered from the injury he sustained against Everton last season.

The Netherlands international is slowly but surely coming back to the boil. Not only is he commanding his own penalty area again, he is venturing forward more and becoming a threat in the opposition box. Defenders like Van Dijk come around once in a generation.

Did you know? Van Dijk regained possession more times against Chelsea than any other Liverpool player (17), while also completing 91% of his passes.

Cesar Azpilicueta: For the second consecutive week, Azpilicueta makes my line-up. The way he handled raids from Andy Robertson and the constant threat from Sadio Mane was outstanding.

We were quite entitled to think Chelsea might have capitulated by losing James, but nothing could have been further from the truth. As for the sending-off, why do the rules insist a player should be punished twice for one offence?

I have no problem with the penalty being awarded, but to dismiss the player as well, when it was clear the ball came off his knee and the handball was a reaction and not premeditated, forced Azpilicueta to vehemently challenge the referee’s decision. It’s a poor rule.

Did you know? No Chelsea player made more tackles (6) and clearances (9) against Liverpool than Azpilicueta. 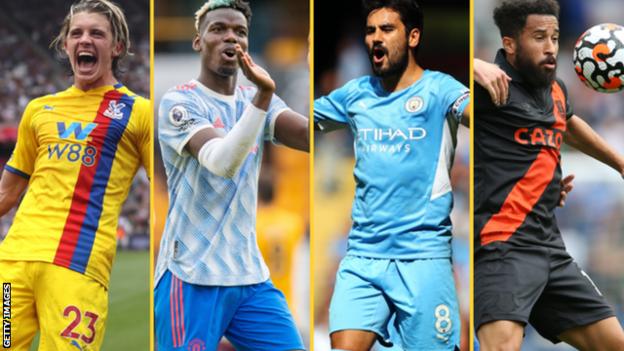 Conor Gallagher: I thought he did extremely well to squeeze his first goal past Lukasz Fabianski, but the second was a sensational finish. Gallagher looks very comfortable in the Crystal Palace set-up.

I saw him play for West Brom while on loan last season and struggle in a poor side. However, the Chelsea player, who is prepared to go out on loan wherever he can to get valuable playing time, is starting to reap the rewards.

I was beginning to get a little worried for Patrick Vieira at Palace, but two goals and his first point on the board away against West Ham is an encouraging sign.

Did you know? Gallagher is only the second player in Premier League history to score 2+ goals across his first two games in the competition for the Eagles, after Bakary Sako (two in August 2015).

Paul Pogba: This wasn’t Manchester United’s finest hour at Wolves, but they got the result, partly due to De Gea’s brilliance and Pogba’s determination. The talking point in this fixture was Pogba’s tackle on Ruben Neves before Mason Greenwood’s goal.

To begin with, the France international won a ball he wasn’t entitled to win. But he did, courtesy of Mike Dean. Had Neves gone down initially, instead of looking at the referee after the ball had been retained by United, then he would have got the free-kick.

But to go to ground after you’ve taken two steps following the tackle, turned around and looked at the referee having lost the ball was a cheek.

Did you know? Pogba attempted (75) and completed (65) more passes against Wolves than any other United player, while also making three interceptions.

Ilkay Gundogan: He was outstanding for City last season and looks like he has another important role to play to ensure his team not only retain the title, but lift the elusive Champions League.

Arsenal on the other hand have no goals and no points after three games and sit at the foot of the table for the first time in their Premier League history. I take no satisfaction in seeing one of the finest clubs in the country reduced to a shadow of its former self.

Quite what Granit Xhaka thinks he was doing tackling an opponent that, even if he won the ball, was in an area of little consequence, totally epitomised the player’s lack of thought or discipline. Precisely where Arsenal go from here is anyone’s guess.

Did you know? Gundogan has scored 12 Premier League goals in 2021, a haul only Harry Kane can better (14) this calendar year so far.

Andros Townsend: This was a very good performance at Brighton by Everton, while the brand of football they are playing under Rafael Benitez is as good as it was under Carlo Ancelotti.

Benitez has made two inspired signings in Demarai Gray and Townsend. Both tormented Brighton, but what took place when Everton were awarded a penalty was most interesting.

Richarlison was determined to take the penalty and held onto the ball. However, it was Townsend that nicked the ball from under the arm of Richarlison, which allowed Dominic Calvert-Lewin to take the spot-kick. Does that go down as an assist for Townsend?

Did you know? Townsend won more fouls (4) than any other Everton player against Brighton and made four tackles. 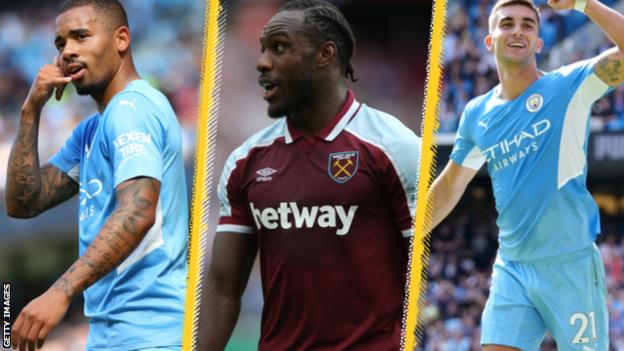 Gabriel Jesus: The Brazillan adds another goal and assist against Arsenal to his early-season tally while trying to convince Pep Guardiola he should be the man leading the line for Manchester City after the departure of Sergio Aguero.

While playing Norwich or a dishevelled Arsenal, they can get away with it. However, against more organised teams when games will be considerably tighter, they will find scoring goals as difficult as it’s always been.

Guardiola must stop messing genuine talented goalscorers around in order to provide a style of football that may be good enough to win the Premier League, but has not proved so successful in winning City the Champions League.

Did you know? Jesus hasn’t lost any of the 43 Premier League games he has scored in, a record only James Milner (54) and Darius Vassell (46) can better.

Michail Antonio: I have never thought this lad was particularly gifted, but I don’t think I’ve seen many players with his enthusiasm for the game or desire. Antonio is playing the football of his life.

He was impressive against Newcastle, brilliant against Leicester and even better against Crystal Palace. The composure he showed in order to lay on Pablo Fornals’ goal was sheer class.

Antonio scored what can only be described as a typical Michail Antonio goal, but the assist for Fornals required thought and a willingness to put the team first. Now that’s a bit special.

Did you know? Antonio is the first player to hit 50 top-flight goals for West Ham since Tony Cottee in the 1985-86 campaign.

Ferran Torres: Scored two goals against Arsenal without breaking sweat, but what did the Gunners expect with a back three of Sead Kolasinac, Rob Holding and Calum Chambers?

This was the team that, under George Graham and Arsene Wenger, would go to places like City and set up for a battle with proper defenders in the side like Martin Keown, Tony Adams, Sol Campbell and Lee Dixon or Ashley Cole, Lauren and Kolo Toure. You always knew you were in a game.

What we saw against Manchester City were defenders who couldn’t defend, led by a manager, Mikel Arteta, who is looking more and more out of his depth by the minute. I’ve heard of One Direction, but this lot had no direction.

Did you know? Torres both scored and assisted (2 goals, 1 assist) in a top-flight league game for only the second time, and the first since scoring one and assisting one for Valencia against Levante in December 2019 in La Liga.

The Crooks of the Matter

Fifa president Gianni Infantino has asked Prime Minister Boris Johnson for exemptions so Premier League clubs will release players for World Cup qualifiers in red-list countries. Meanwhile, it seems countries are being added to the list by the hour, but the Fifa president suggests it’s a “matter of great urgency and importance” that players are released.

What – to play football?

While destination weddings all over the world are being cancelled and international conferences put on hold, Infantino insists World Cup qualifiers should continue regardless. He said, “a show of solidarity from every member association, every league, and every club, to do what is both right and fair for the global game”.

How about what is right for the nation’s public health? The Department for Culture, Media and Sport made it clear that there is no desire to change current policy and allow players to travel to countries on the red list – and quite rightly.

Spain are also in support of the UK government’s position and I have no doubt other countries will follow. Even the Premier League, in a rare show of solidarity, voted unanimously against Infantino’s request.

His final comment totally captures Fifa’s commercial interests by claiming the integrity of the qualifiers are at stake. But the reality is Fifa’s controversial 2022 World Cup in Qatar is already engulfed in criticism as the hosts attempt to conduct matches in blistering temperatures and artificial conditions.

The last thing the competition can afford is for the best teams, who invariably have the best players, not to qualify for the World Cup finals due to some quirk of fate.

That would be a commercial disaster for Fifa as half of the football world are opposed to the tournament being held in Qatar – and the other half looking for a reason not to go.