Grateful Dead have teamed up with Cali-based accessories brand, Slowtide, on a new collaboration of blankets and beach towels, inspired by the band’s album art and iconography, and the laidback vibe of the West Coast.

Two throw blankets are available on Slowtide.co right now, both inspired by the counterculture movement of the Sixties, and made from a soft, sustainable cotton. The “Filmore” blanket (pictured above and available here) is inspired by the band’s legendary shows at the Filmore Auditorium in San Francisco in 1969. The shows, which took place between February and March of that year, were later released as the Filmore West 1969 album — widely believed to be one of the first live recordings of the Grateful Dead.

The Filmore blanket features a hippie-inspired print, with the Dead’s familiar skull motif and 13-point lightning bolt seen throughout. Made in the USA, the blanket features a reversible design and fringe finish. The blanket was sold out when it was first released, but just got a restock. Find it here for $149.95. 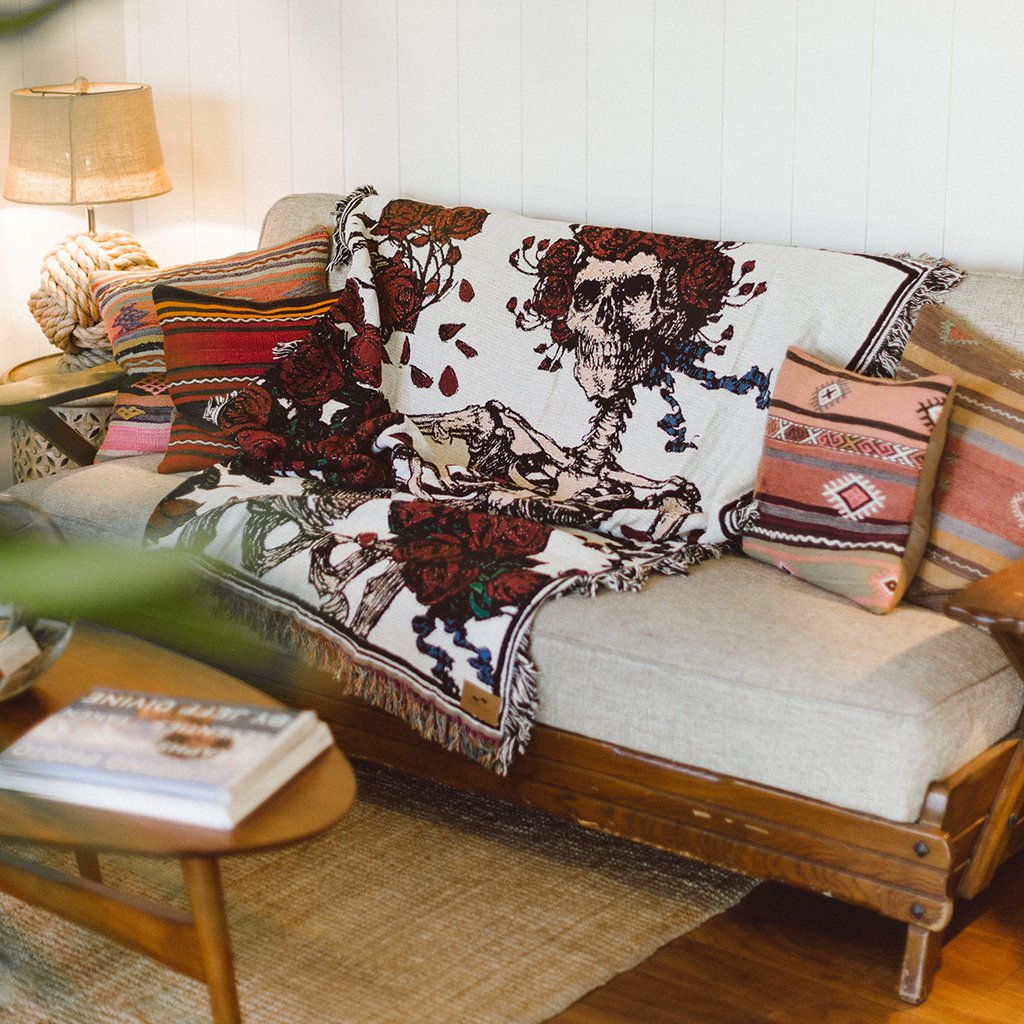 The Skull & Roses Bertha Blanket, meantime, is a heavyweight blanket that riffs off the iconic album art from the Dead’s 1971 release, known as the Skulls and Roses album. Both blankets measure 50 x 68 inches and can be used as a throw blanket, bedding or hung as wall art.

The Slowtide x Grateful Dead collaboration also includes a number of towels, that Slowtide says is “influenced by the ocean and beach culture.” Six different Dead-inspired prints are still available on the website, with each design superimposed on a 30 x 60-inch beach towel. The designs are printed on a single side (the other side is a solo color) and Slowtide says it uses reactive dye that helps prevent fading.

The limited-edition release came out last fall and many styles immediately sold out online, making these blankets and towels a true collectors item. A number of styles are now re-stocked on Slowtide.co, but once again selling quickly. 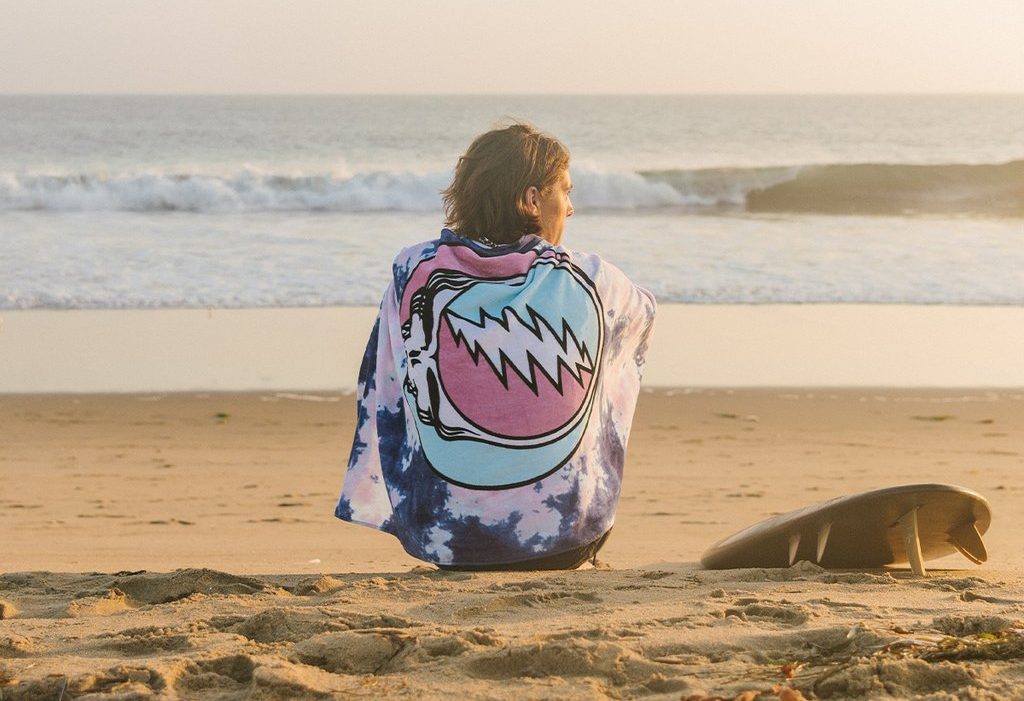 The towels are all made with sustainably sourced cotton, and are designed for the beach or use at home (also great for outdoor concerts and music festivals whenever those start up again).

Slowtide says all its cotton is certified through the The Cotton LEADS program, which promotes responsible cotton production through the use of best practices and traceability in the supply chain. All Slowtide products also pass the Oeko-Tex Standard 100 certification, meaning they are safely produced and do not contain any harmful chemicals or allergic substances. 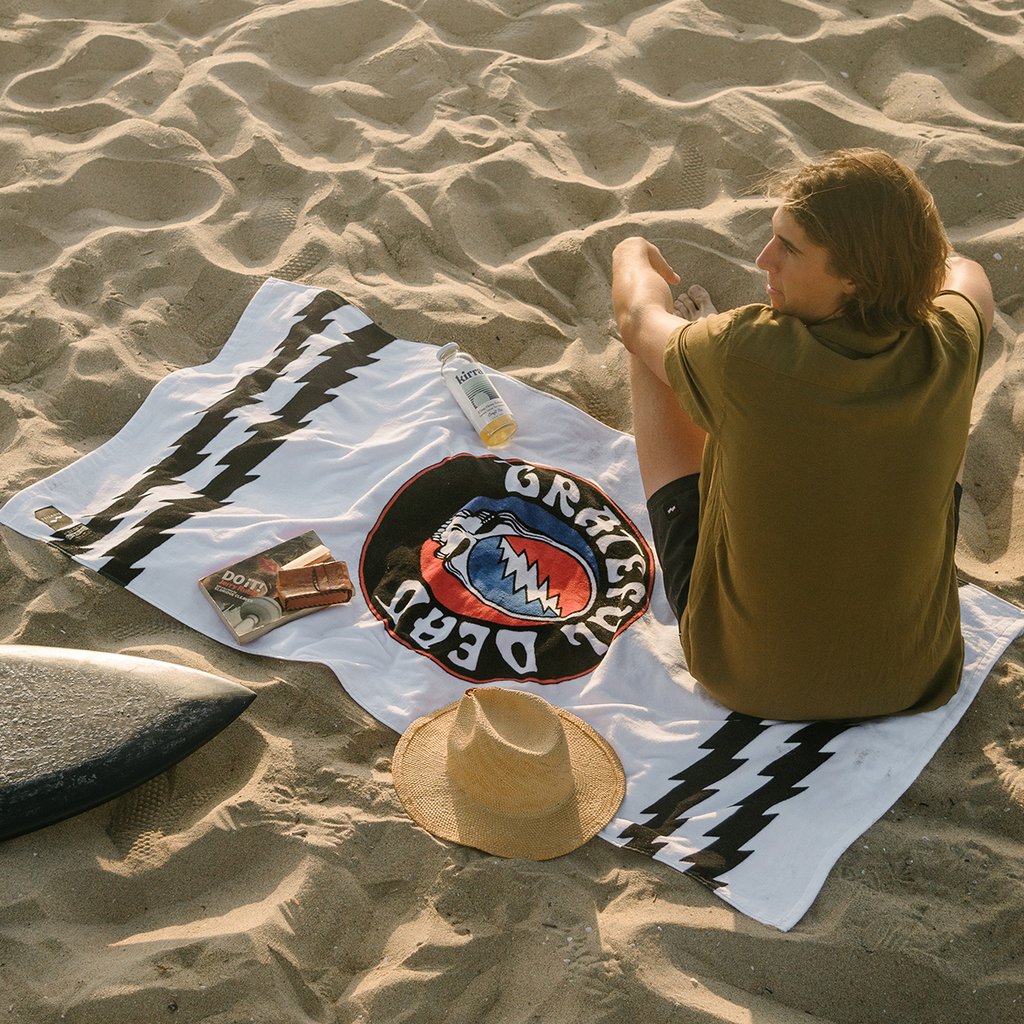 This is an officially-licensed collaboration between Slowtide and the Grateful Dead. This also marks the fourth time the two have worked together. The blanket and towel collection follows a limited-edition Grateful Dead phone case collab with tech accessories brand, Casely, that just got re-stocked last fall.