When you subscribe we will use the information you provide to send you these newsletters. Sometimes they’ll include recommendations for other related newsletters or services we offer. Our Privacy Notice explains more about how we use your data, and your rights. You can unsubscribe at any time.

Brooklyn Centre police officers pulled over the Duante White, 20, who they say had an outstanding arrest warrant, just before 2pm local time (9am BST) on the 6300 block of Orchard Avenue. They claimed he then attempted to reenter their vehicle, where an officer then shot the driver who then drove for “several blocks” before hitting another vehicle in the area of 63rd Avenue North and Kathrene Drive. 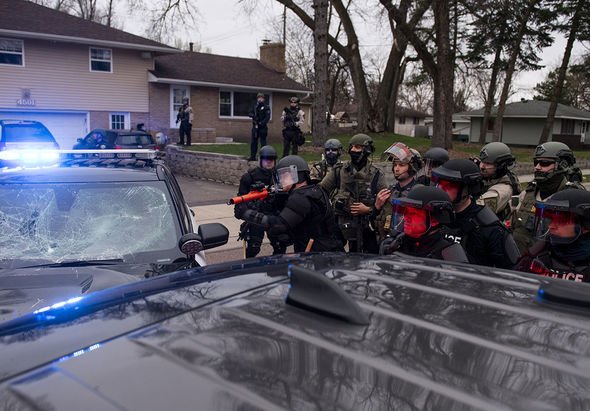 Minnesota news: Reports of looting have emerged as anger over the shooting grows (Image: GETTY) 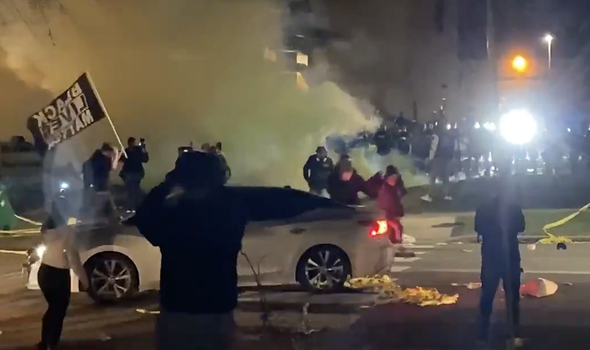 Protesters walked to the Brooklyn Center police headquarters near 67th Avenue North and North Humboldt Avenue and were locked in a standoff with police in riot gear late Sunday night.

Officers repeatedly ordered the crowd of about 500 to disperse as protesters chanted the victim’s name and climbed atop the police headquarters sign, by then covered in graffiti.

Scattered incidents of looting were reported throughout the city.

At 7pm (1am BST), dozens of people had gathered at the corner of 63rd Avenue North and Lee Avenue, just down the street from where the shooting happened about five hours earlier.
People used megaphones, joined by the crowd, to call for justice for the victim.

Members of the community have started congregating near the site to protest, holding Black Lives Matter signs, playing music and chanting at police.

A group of law enforcement officers in tactical gear were seen lining up across from protesters on the other side of the crime scene tape.

Officers from the Brooklyn Center Police Department said in a statement they believed body-worn cameras and dashboard cameras “were activated” during the shooting.

This was taken at 7:15
Police SUVs were getting damaged – one was throwing a concrete block to smash windows, others were stomping the roof.

Police moved in to try and keep order.

The mother of the shooting victim got on speaker asking everyone to stop the violence. pic.twitter.com/RAbMxaSSel

Minnesota news: Police officers pulled over a driver for an existing warrant, with one shooting them (Image: KARE11 / NBC)

Minnesota news: The driver then sped off before crashing into a parked car, and was pronounced dead at the scene (Image: KARE11 / NBC)

Earlier in the day, Ms White recalled the moments leading up to the man’s death.

She said to reporters: “He called me at about 1:40, said he was getting pulled over by the police.

“He said they pulled him over because he had air fresheners hanging from his rearview mirror.”

“I said when the police officer comes back to the window, put him on the phone and I will give him the insurance information.

“Then I heard the police officer come to the window and say, ‘Put the phone down and get out of the car.’”

It comes a day before the start of week three in the trial of Derek Chauvin, the now-former Minneapolis police officer charged in the death of George Floyd.

Mr Chauvin, who is on trial for murder, was captured on video kneeling on Mr Floyd’s neck which sparked international outrage and kicked off last year’s Black Lives Matters protests.

Minneapolis police Chief Medaria Arradondo denounced his former officer, and called it “not part of our ethics or our values”.