West Ham hope to sign striker Tammy Abraham, 23, from Chelsea in the summer, with two other English players, Arsenal’s Eddie Nketiah, 21, and Brentford’s Ivan Toney, 24, also on their list of goalscoring options. (Star)

Spurs look likely to be given the opportunity to sign Wales forward Gareth Bale, 31, permanently from Real Madrid in the summer transfer window. (Express)

Eintracht Frankfurt’s Portuguese striker Andre Silva, 25, says he is flattered to be linked with a possible move to Manchester United. (Mirror)

Premier League clubs have discussed changes to the transfer window that would permit players under the age of 21 to leave on loan after deadline day. (Mail)

This summer could be “now or never” for England striker Harry Kane, 27, if he wants to leave Tottenham to take the next step in his career, says former Spurs midfielder Danny Murphy. (Talksport)

English defender Gary Cahill, 35, says he has no concerns about his future at Crystal Palace despite being out of contract this summer. (Evening Standard)

Sheffield United goalkeeper Aaron Ramsdale, 22, says he wants to stay at Bramall Lane next season – even if they are relegated – after West Ham were linked with a move for the England Under-21 international. (Sheffield Star)

Newcastle midfielder Kyle Scott, 23, has travelled to the US to try to win a move to FC Cincinnati. He has played for England, the Republic of Ireland and the US at youth level. (Sun) 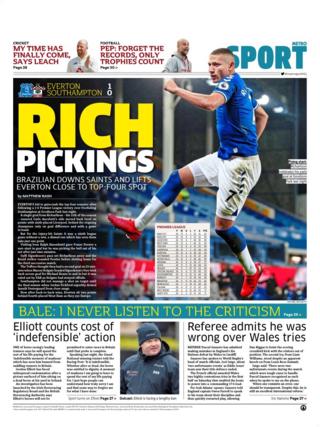