Paris St-Germain’s Argentine midfielder Leandro Paredes has confirmed he was told by club bosses “not to talk about Lionel Messi” amid transfer speculation linking the Barcelona’s 33-year-old forward with a move to the French capital. (Le Journal du Dimanche – in French)

Meanwhile, Manchester United will focus on Haaland as a top-priority signing, while any approach for Tottenham’s 27-year-old England forward Harry Kane is now seen as unlikely. (Manchester Evening News)

Dutch midfielder Donny van de Beek, 23, wants to leave Manchester United after less than a season at Old Trafford and has requested a meeting with club bosses. (Star)

Arsenal are looking at keeping Real Madrid midfielder Martin Odegaard, 22, at Emirates Stadium next season, with the London club exploring both another loan or permanent move for the Norway international. (Mail)

Plans to allow 20,000 fans to watch the FA Cup final at Wembley may be restricted to local supporters to mitigate unnecessary travel, meaning fans based outside London would be unable to attend. (Telegraph – subscription required)

Chelsea hope to agree a new contract with Antonio Rudiger, 28, before this summer’s Euros to avoid allowing the Germany defender to enter the final year of his current deal. (Mail)

Hatayspor striker Aaron Boupendza is keen to move to the Premier League and is being monitored by a number of clubs, including Southampton, Tottenham, Leicester, West Ham, Newcastle United, Crystal Palace and Wolves. Boupendza’s Gabon international team-mate Pierre-Emerick Aubameyang has also spoken to Arsenal about the 24-year-old. (90 min)

Barcelona are ready to offer a new contract to France forward Ousmane Dembele, 23, who has previously been linked with a potential move to Manchester United. (Mundo Deportivo – in Spanish)

West Brom are among a number of clubs monitoring the progress of Newport’s English defender Priestley Farquharson, 24. (Football Insider) 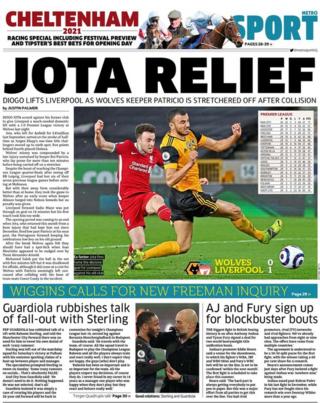