Aston Villa are hopeful of tying captain Jack Grealish, 25, down to a new £150,000-a-week deal amid interest from Premier League champions Manchester City in the England midfielder. (Telegraph – subscription required)

Juventus expect striker Cristiano Ronaldo, 36, to make a decision on his future soon following Portugal’s elimination from Euro 2020. The five-time Ballon d’Or winner’s contract at the Serie A side runs until 2022. (Tuttosport – in Italian)

Juventus have entered the race to sign Arsenal midfielder Granit Xhaka with Serie A rivals Roma also said to be interested in the 28-year-old Switzerland captain. (Calciomercato – in Italian)

English midfielder Emile Smith Rowe has a “verbal agreement” to sign a new contract with Arsenal. Aston Villa have seen at least two offers turned down by the north London side for the 20-year-old, with their first offer of £25m dismissed earlier this month. (Express)

Crystal Palace, Southampton and Norwich City are eyeing a deal for Borussia Dortmund’s 29-year-old Danish midfielder Thomas Delaney, whose contract with the German side expires in 2022. (Sky Germany – in German)

Chelsea are interested in signing 31-year-old Barcelona midfielder Miralem Pjanic this summer, The Bosnian only joined 12 months ago from Juventus but the Spanish side are looking to significantly reduce their wage bill. (Sun)

English midfielder Jack Harrison, 24, is expected to complete a permanent move to Leeds United this week having been on loan with them from Manchester City for the past three seasons. (Manchester Evening News)

Leeds are also set to complete the signing of Barcelona full-back Junior Firpo, 24, after edging out several Premier League and Serie A clubs to land the former Spain under-21 international. (Goal)

Manchester United have turned their attention away from Barcelona forward Ousmane Dembele, 24, after the Frenchman suffered an injury setback at Euro 2020. (Mirror)

Arsenal are expected to submit an official bid for Sheffield United goalkeeper Aaron Ramsdale, 23, after he returns home from Euro 2020 duty with England. (Sheffield Star)

Liverpool are in ‘advanced talks’ to sign Brazilian midfielder Otavio, 25, from Porto as they continue their search for a replacement for Gini Wijnaldum. (Express)

Aston Villa are interested in signing Manchester United centre-back Axel Tuanzebe on loan for the 2021-22 season with the 23-year-old having had two previous loan spells at Villa Park. (Football Insider)

Newcastle United owner Mike Ashley is reluctant to pay a fee for players over the age of 27 which has resulted in talks with Southampton over signing Gabon midfielder Mario Lemina, who is 28 in September, hitting a stumbling block. (Mail)

Swansea City right-back Connor Roberts has emerged as a target for Burnley, with the 25-year-old Wales international having just one year left on his contract with the Championship side. (Mail) 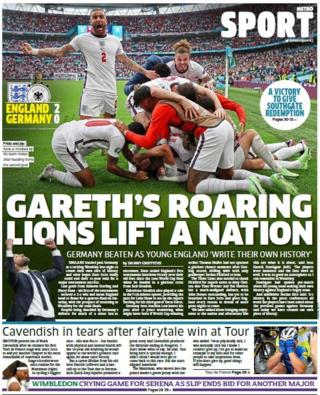