Chelsea have revived their interest in West Ham’s Declan Rice and could use striker Tammy Abraham, 26, in part exchange for the 22-year-old England midfielder. Both Manchester United and Manchester City also remain interested in Rice. (Sunday Telegraph – subscription required)

Manchester United are ready to table a huge offer to bring Kane to Old Trafford. United’s offer would compensate Kane for any lost earnings at Spurs. (Sunday Times – subscription required)

Guinea midfielder Naby Keita, 26, wants to leave Liverpool and his agent has approached Atletico Madrid to gauge the possibility of a move to the new Spanish champions. (AS – in Spanish)

Everton and Juventus are interested in signing Manchester United’s 34-year-old Argentina goalkeeper Sergio Romero, who is keen to leave Old Trafford after being overlooked by Ole Gunnar Solskjaer this season. (Mail on Sunday)

Crystal Palace’s 28-year-old Ivory Coast forward Wilfried Zaha says if a “top” club wanted to sign him he “wouldn’t turn it down”. He has been linked with clubs including Arsenal and Everton. (The Face)

Middlesbrough’s 25-year-old English forward Ashley Fletcher has agreed to join Premier League-bound Watford on a five-year deal when he becomes a free agent in June. (Sun on Sunday)

Meanwhile, Crystal Palace have shown interest in a summer move for FC Copenhagen’s 22-year-old Danish centre-back Victor Nelsson, who has previously been linked with Aston Villa. (Mail on Sunday)

Leicester City are the latest club to join the race for Southampton’s England defender Ryan Bertrand, with Arsenal and AC Milan also linked with the 31-year-old left-back, who is out of contract in the summer. (Talksport)

Newcastle United are eyeing a summer move for Queens Park Rangers’ 25-year-old English defender Rob Dickie, who has been a long-time target for the Magpies. (Football Insider)

The agent of Inter Milan and Argentina striker Lautaro Martinez, 23, has met with Atletico Madrid and Real Madrid. (Marca)

Juventus could move for Barcelona’s 30-year-old striker Antoine Griezmann as a replacement for Portugal forward Cristiano Ronaldo, 36, whose future remains in doubt. Juve are considering a loan move for the France forward, but are also open to a swap involving Argentina striker Paulo Dybala, 27. (La Stampa – in Italian)

Newcastle United will try again to sign Leicester City midfielder Hamza Choudhury, 23, having missed out on the former England Under-21 player in January. (Mail on Sunday)

Barcelona could look to cash in on Germany goalkeeper Marc-Andre ter Stegen, 29, in the summer and replace him with Italy’s Gianluigi Donnarumma, 22, who may leave AC Milan as a free agent if the Italian club fail to qualify for the Champions League. (AS – in Spanish) 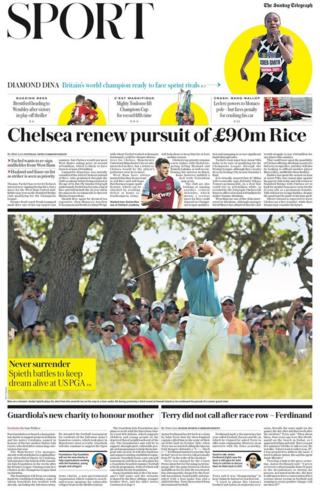 The sport section of the Sunday Telegraph

Who was the best scouting success of Sir Alex’s era?

Are Pogba and Kante better than Vieira and Makelele?

‘When I realised Paul was here, I didn’t think twice’