Real Madrid manager Zinedine Zidane has told his squad that he will leave at the end of this season. (Goal)

Everton boss Carlo Ancelotti and former Juventus manager Massimiliano Allegri are among those being considered to replace Zidane if he leaves the club. (Sunday Mirror)

Manchester City have been told they can sign Argentina forward Lionel Messi, 33, from Barcelona if they pay him £500,000 a week after tax. (Sun on Sunday)

Manchester United want France midfielder Paul Pogba, 28, to sign a new contract but are wary of the wages his agent, Mino Raiola, is trying to get for his client. (Sunday Mirror)

Lyon and Netherlands forward Memphis Depay, 27, is on the brink of joining Barcelona. (L’Equipe – in French)

Poland striker Robert Lewandowski, 32, is on the radar of Paris St-Germain should he decide to leave Bayern Munich. (L’Equipe – in French)

Liverpool will not sign Turkey centre-back Ozan Kabak on a permanent deal this summer. The 21-year-old joined on loan from Schalke in February. (Sun on Sunday)

Arsenal are hoping to beat Manchester City to the signing of 31-year-old England left-back Ryan Bertrand, who will leave Southampton when his contract runs out at the end of the season. (Mail on Sunday)

Under-pressure Barcelona boss Ronald Koeman has met with club president Joan Laporta and says the pair will talk again at the end of the season. (Goal)

Eintracht Frankfurt are keen to appoint former Real Madrid striker Raul as their manager for next season. (Marca)

Villarreal are in pole position to sign Barcelona and Brazil full-back Emerson. The 22-year-old is on loan at Real Betis. (Mundo Deportivo – in Spanish)

Real Madrid are interested in signing France midfielder Eduardo Camavinga from Rennes, with Arsenal also interested in the 18-year-old. (Marca)

Bristol City, Cardiff City and Middlesbrough want to sign 30-year-old Republic of Ireland striker James Collins, who is out of contract at Luton Town. (Mail on Sunday) 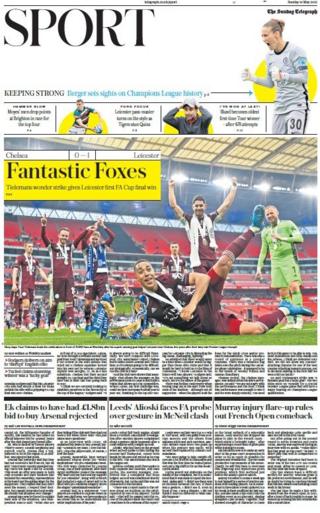 The front page of the Sunday Telegraph sports section

Bookies have their say on Sergio Ramos’ next club

McTominay: How Ferguson and Fletcher inspire me